My first novel Our Dried Voices was published three years ago. As you might expect, I learned a lot going from publishing newbie to debut author, and I reflected on five of those lessons in this article. But as long as you remain willing to learn, the lessons never end. Three years later, and two months removed from the release of my second novel The Friar’s Lantern, here are five more lessons I learned the second time around.

Two years later, I came up with an idea for one of the main story threads. Another two or three years later, I began to outline the basic elements of the story. And now it’s a completed novel. All from that one sentence that never would have amounted to anything if I hadn’t written it down.

Ten years ago and earlier, I kept track of my writing ideas in a spiral-bound notebook. Today I use the Evernote app. However you do it, find a way to curate all your good ideas, even if you don’t know what they’ll become. Someday, you may discover connections between multiple ideas or build an entire story on a single, decade-old thought.

Instead, I made the fortunate decision to begin work on The Friar’s Lantern shortly after I submitted the manuscript for Our Dried Voices to agents and publishers. I sent out Our Dried Voices queries, I revised that novel and I continued to plug away at The Friar’s Lantern. Six years later, I’m proud to have both of them published. It’s not glamorous, it’s a process, it’s work. But if you’re a writer, you have to keep writing.

But The Friar’s Lantern is a different kind of novel. Not only is it a choose-your-own-adventure story, but it involves more characters and plotlines than does Our Dried Voices. It was a good format to force me to put myself into the story and try out different plot options. What did I want to happen if the reader chose Path A instead of Path B? As a reader, how would I feel about that choice and outcome? And what were the implications of that choice for the novel as a whole?

As a result of this exploration, I came up with new story paths that I hadn’t expected. I also got some good suggestions from my beta readers that I turned into new scenes.

There’s so much going on in any novel. Characters with conflicting agendas, intertwining plot lines, factual details, and more. Not to mention the fact that I, like many writers, like to skip around in my stories instead of writing them straight through from beginning to end. With all those elements to worry about, it can be easy to focus too much on the details and forget what you wanted your story to be about in the first place.

That’s not to say your story can’t change as you write it. Characters may make unexpected choices and new plot twists may suggest themselves. But in most cases, writers know the big picture of what they want their stories to be about.

For me, there was one main idea I didn’t want to forget in The Friar’s Lantern. And because I was writing the novel at night, on weekends, during my lunch breaks, on the train to and from work and whenever else I had a few spare moments, I was especially concerned about losing track of that idea. My solution was to write it on multiple post-it notes and stick them to my laptop at home, my computer at work and the inside of the folder containing my latest draft. And they stayed there for years while I wrote and edited the novel. It was an easy way for me to start every writing session with a reminder of the big idea I wanted to express in the story.

When I signed a publishing contract for Our Dried Voices, I figured I had found a home for my next several books. But just as I was wrapping up the final draft of The Friar’s Lantern, my publisher informed me she was shifting her focus to non-fiction titles. I was about to start over from square one.

It was a tough blow. But I decided I had to look at this setback as an opportunity. I had come a long way as an author since I wrote and submitted my first novel. I had learned a lot about writing, the publishing industry and connecting with readers. And this time around, I had a published novel under my belt. I had a great relationship with my first publisher. But I was optimistic I could find an even better fit for The Friar’s Lantern. And even though it took me a little longer than I hoped, I found a new home for my work this year. 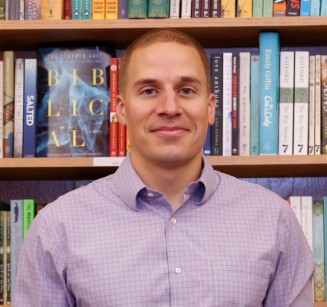 Biography: Greg Hickey is a former international professional baseball player and current forensic scientist, endurance athlete, and award-winning screenwriter and author. His debut dystopian fiction novel Our Dried Voices was a finalist for Foreword Reviews’ INDIES Science Fiction Book of the Year Award. His second novel, a literary choose-your-own-adventure called The Friar’s Lantern was published in October. Interested readers can start reading both novels for free on his website. Greg lives in Chicago with his wife, Lindsay.